Sometimes we are required to show numbers as a Fraction in Excel, but it could be litter tough.

In case you try and enter any fraction in a cell, there is a possibility that Excel may change it to a date or text string.

Have you ever think why this happens? This happens because fractions are not one of the data types that Excel understands.

So when we give any fraction numbers to excel it will convert them into a date or text string.

In this short tutorial, I will show you a couple of methods you can use to display numbers as fractions in Microsoft Excel.

While fractions may be something that Excel does not understand by default, Decimal is an acceptable data type.

Let’s understand with one excel of the following data set. 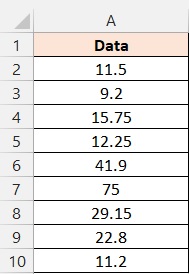 Now there are two things we need to know when we are using the inbuilt Fraction format to convert decimals into fractions:

The default fraction function of excel will give you a result only when a single-digit is available in decimal.

But there is other inbuilt fraction formats available in excel that you can use.

Suppose we have a below data set of decimal numbers.

Based on whatever fraction format you choose, the numbers in column A would be displayed in that format.

Below are all the fraction formats that are available to you: 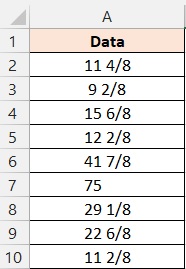 Creating Your Own Fraction Format in Excel

In most cases, the inbuilt fraction formats are sufficient.

Since I do not have any inbuilt format where the denominator can be 30, I can create my own fraction format in this case.

The above format would convert all the decimal numbers into a fraction where the denominator is always 30. 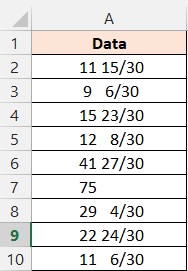 Let me quickly explain how this custom number format works:

How to Compare Dates in Excel

Please include attribution to with this graphic.